Mini-Cinema and The Commitments 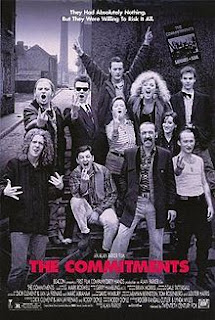 It's amazing the things you don't know. Recently, we were invited to a small party to watch The Commitments, the Alan Parker film based on the Roddy Doyle novel of the same name. Nothing strange in that, except the venue: Denzille Cinema, Denzille Lane. The lane in question is a short (very short) walk from Merrion Square, but this 30 seat private cinema has been there for ages (well, 1999). It was a case of something new, and something I hadn't seen for quite some time 1xbet deposit bonus.

Lets start with revisiting the film I hadn't seen for a while. The verdict: it's still fresh, with a lot of genuine belly laughs. I first saw it back in 1991. I was still in school, looking into the forest of the Leaving Cert, but taking time out to trek into town to the Savoy cinema with friends, to spend my punts. To say it was huge, is probably understating it. It was mega! And the story of trying to start a band is timeless and universal Melbet promo code Nigeria.

Back then, it was great seeing a modern movie about Ireland set in the present, filmed in Ireland, and with Irish actors, a lot unknown, and some known to us here (Once fans, its a good chance to see Glen Hansard in an early film, now that he has an Oscar and a Broadway show under his belt, and Trekkies can see Colm Meany in action). It was well made, written and acted, and a touch irreverent, as the poster shows, but honest. It looked at our world, as it was then, in a language we spoke, and it was great. I remember how in an interview Alan Parker noted that in other countries they had to explain the slang words. It also came along at a time when Ireland was beginning to experience huge change (success of the football team, Riverdance was on the way, Eurovison was well conquered), not that we knew it back then. We didn't. All we knew was that it was a great film.

Not only was the movie huge, the soundtrack was as well, and sounds amazing today, full of soul songs like Mustang Sally and Try a Little Tenderness, all arranged and performed with energy, rawness and class. In a way, it is the heart of the film, as it should be. The scenes at the gigs make you feel like you are there, in the crowd, listening to the band do its thing. It stands the test of time in all departments.

Watching it, or any movie in a small, private cinema was totally new for me. The fact that it has been there in Dublin for quite a while (the only one, in fact) made it more amazing. I think the majority of people were there for the first time. It isn't something I'd really think of, in all honesty; 'Oh, let's go to that small, private cinema for a night out at the movies'. Well not until now.

In reality, we're not really the target market, to use business speak, and a quick look at their list of clients on their website proves it: Warner Brothers, Jameson Distillery, Disney, Irish Film Board and The Green Party (?! yes, they are there!). But it proved a great, relaxed night out. The staff (1) was really good and low key, but friendly. The nibbles were nice: antipasti, and a choice of wine, beer, soft drink or water (although food is not allowed in the screen, drinks are). After a get-together there, it's on to the comfy, and well furnished screen, proudly showing Dolby Digital Sound. And the seats are wide and soft, a great way to enjoy the movie, with the trappings of the large cinemas, among friends and in a great atmosphere www.brainytrading.ng/1xbet-app-download.

That feeling of being in a small group, among friends, having some food and a movie, was great. It was like watching it at home, being able to sing along, have some fun, while being in a cinema at the same time. It was a really good night out, and something I'll think about in the future. It really is a little bit different.

Posted by The Red Curtain Review at 9:25 AM 2 comments

The Red Curtain Review
Hi, I'm Alan! If you're a fan of musical theatre, movies or books, this is the place for you. It's to let people know of shows that are happening, new shows and shows I've seen, (and want to see), as well as all sorts of stories, facts and figures on musical theatre.